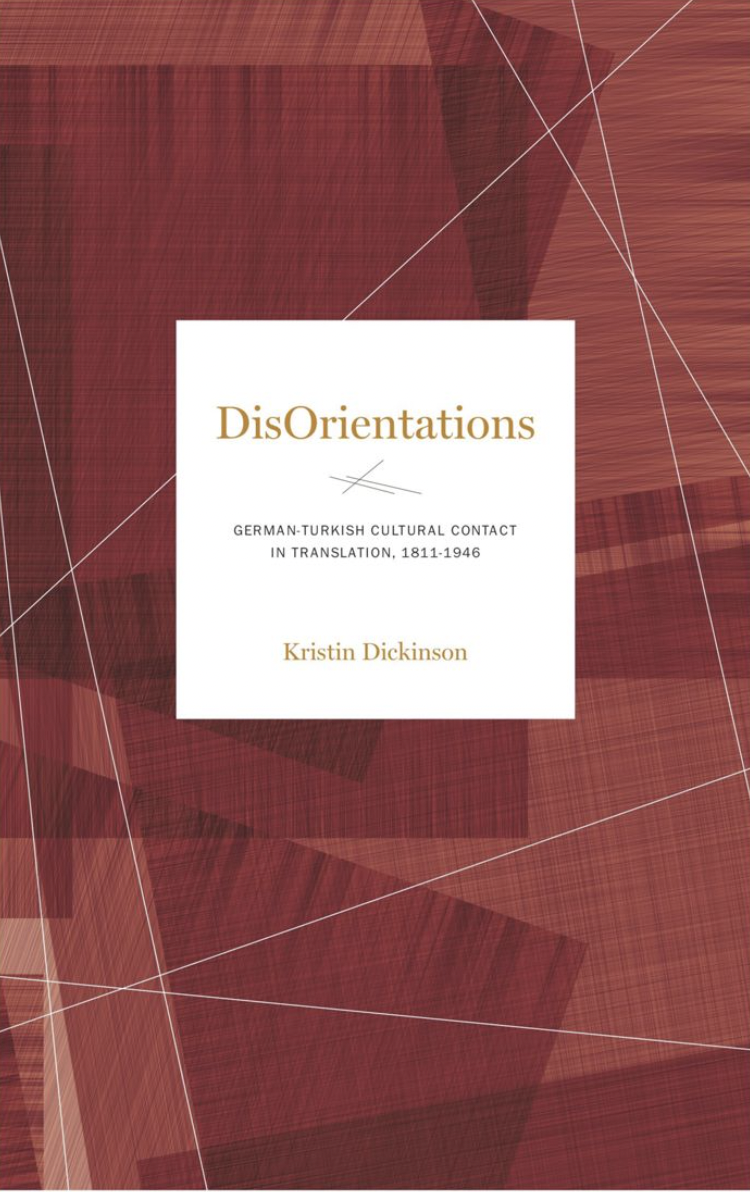 In a work that parses the literary, philosophical and political reflections of a varied cast of writers, Kristin Dickinson prompts us to consider how Orientalist methods were shaped in part by an impulse to reinforce the “self” through contact with, and translation of, an other. At the same time, her excursion through almost one-and-a-half centuries of German-Turkish cultural exchange, challenges sclerotic notions of originality and fidelity that still dominate discussions of literary transfer. Her point of departure is the 1896 novel Araba Sevdası (The Carriage Affair) by Recaizade Mahmut Ekrem, which both in the story it tells, and its translation history, is an ideal invocation to Dickinson’s own book. The introduction to DisOrientations performs its title by dropping readers into a scene of textual confusion from the novel: the protagonist, Bihruz, is in the process of composing a love letter, a patchwork of shoddy translations from French and Ottoman Turkish poetry, for which he enlists the aid of the “Redhouse,” a dictionary authored by the eponymous British Orientalist, Sir James. Bihruz commands neither French nor Ottoman Turkish, and appeals to a Briton in his epistolary blunders. He also happens to feature in a novel whose first translation into any language first came out in 2014, as Leidenschaft in Çamlıca (A Passion in Çamlıca), with the German publisher Literaturca. That event—part of a contemporary push towards translating from Ottoman Turkish into German—prompts Dickinson to suggest that we “reconsider the importance of a German- (Ottoman) Turkish relationship where we might otherwise presume it to be absent” (Dickinson 6).

Dickinson thus guides our attention from the intradiegetic French-Ottoman links to the comparatively less studied case of German-Turkish cultural contact in the 19th and first half of the 20th centuries, and in so doing, offers us a model for thinking about translation processes with applicability well beyond the geographical or chronological scope of her own book. Dickinson’s tripartite work commences by revisiting the Ottoman-Turkish-inspired elements of Goethe’s West-östlicher Divan. Goethe’s interaction with Joseph von Hammer-Purgstall’s translation of the Persian Divan-e-Hafiz is well established, but his use of translations from Ottoman-Turkish, such as those of the diplomat Heinrich Friedrich von Diez, has received less attention, despite a long history of Ottoman-Habsburg or -Prussian relations. Dickinson’s first chapter suggests that Diez was himself non-traditional in conceiving of the Orient as a living, and not a dead, entity. She then explores the ways in which Goethe draws from Diez’s translations, and concludes that Goethe’s approach escaped the confines of a philology straitjacketed by rigid notions of original and target, and “more closely aligne[d] with the flexibilities of the Ottoman lyric tradition itself” (60).

Dickinson also uses Goethe’s Divan as a way to engage with Weltliteratur, a vagabond term that surfaces in many of his writings. She contends, as other scholars have, that the concept of Weltliteratur is rooted in colonial and Orientalist practices. Yet she argues that Goethe’s own ruminations in Divan, in questioning the nature of originality, might give us a “glimpse [of] the potential of an alternative conception of Weltliteratur that does not serve a strictly Eurocentric ordering of the world,” but instead “forges meaningful alliances with literary traditions, such as those of Ottoman Turkish” (63). A methodological takeaway is that our time is well-spent examining Goethe’s practice in his poetry, rather than merely trying to extract definitions from it.

In Chapter 2, Dickinson contextualizes the translations of Goethe’s Die Leiden des jungen Werthers into Ottoman Turkish against the backdrop of the Classics Debate of 1897, unleashed by Ahmet Mithat, who insisted that Ottoman authors had not yet entered their own classical period” (66). Here she suggests that the very multiplicity of Ottoman Turkish Werther translations—she names five translators between 1886 and 1894—is evidence against a view of Ottoman writer’s excessive deference to European works. Granular details of translation carried out by Ahmet Rasim and Hüseyin Daniş bolster Dickinson’s argument that the process is one of debate and criticism, in which translators themselves possessed nontrivial agency. This is valuable pushback against a view that might rather conceive of the translator as unobtrusive conduit, instead of active interlocutor.

Part 2 turns toward literary transfer from Ottoman Turkish into German, manifested in such activities as the publication of the Turkish Library, a multivolume translation appearing in Germany between 1924 and 1929. A central character in Part 2, Friedrich Schrader, challenged the paradigm of authoritative academic translation embodied in the Library. Though he participated in the early 20th century German self-positioning as a role model to the Ottoman Empire, Schrader also encouraged emergent Turkish nationalist impulses. In this context, Dickinson discusses Ahmet Hikmet Müftüoğlu’s short story, “Yeğenim” (“My Nephew,” 1899) about another dandy, perceived both as insufficiently Turkish and insufficiently French. Dickinson argues here that Schrader’s translation of the work,“Der Kulturträger,” which appeared in 1908 in the periodical Ottoman Lloyd—an organ of German influence in the Ottoman Empire—“calls attention to aspects of the civilizing mission at work in Germany’s economic and military interactions with the Ottoman Empire” (88).  Later, Dickinson argues that his translation of Halide Edip Adıvar’s The New Turan reveals the extent of his enthusiasm for a modern identity rooted in the idea of a Turkish race. Dickinson points out, however, that in his turn to Persian and Ottoman divan poetry in later life, Schrader seemed to argue for a more syncretic notion of Turkishness, one that drew from Hellenistic influences—among which he counted ancient Persia (144). If Schrader remains a character of ambivalent paternalism, the message of Part 2 is nonetheless evident: translation is often correlated with diplomatic or nationalist trends, from within or without.

The third part of the book turns toward literary activity in Early Republican Turkey, following the modernist author Sahbattin Ali. Dispatched to study in Germany on a government grant, Ali published “Mufassal Cermenistân Seyâhatnâmesi” (“The Comprehensive Germanistan Travelogue’’) in 1929.  Dickinson argues that by writing in Ottoman Turkish, using the Perso-Arabic script, and adopting the forms of older travelogue traditions in the Islamic world, Ali’s deliberately humorous and antiquated work serves as a “prescient alternative to conceptualizations of world literature that would emerge in Turkey in the following decade” (148).  As evidence of Ali’s transgressive approach, Dickinson offers an example of what she calls “cubist etymology”: Ali suggested that Potsdam could be understood as Putseddümm, which, taken as the sum of its syllables, means “O Mother mary, cover the idols! ” in Ottoman Turkish (151). What might seem an abstruse word game in fact crystallizes several aspects of Dickinson’s argument. First, she suggests that phonetic translation cannot be disregarded, particularly against the backdrop of federally mandated—and even punitive—changes to the script used for Turkish. Second, she argues that in playfully situating the roots of “Potsdam“ in Ottoman Turkish, Ali is revealing the fallacy in the search for pure origins.

Despite his subversion of governmental attempts to tame phonetic ambiguity,  Ali was himself active in the state-funded Translation Bureau until 1944, when he was removed from his post. Dickinson devotes the end of Part 3 to a brief history of the Bureau, responsible for the Translations from World Literature Series, for which Ali selected many of the German titles—notably, several by Kleist, well known for a “radical skepticism” of 19th century Prussian society (177). This final section offers a glimpse into the activity of Turkish writers deployed in the service of a nation-building mission for which a belletristic turn toward Western Europe was no act of cultural self-subordination. Dickinson demonstrates that, just as with the Turkish Library, the activities of the Bureau too were undergirded by a belief in the accurate transferability of a text into the target environment, and a desire to stake claim to the literature of another language.

In a work as dialectical as Dickinson’s, there yet emerges a compelling and recurrent message. Translation is rarely ever an innocuous movement from original to source, but an arena in which nation-building interests, markets, humanism, cultural fetish, individual tastes and languages collide. In the landscape of negotiations on world literature, where scholars from Emily Apter to Pheng Cheah have identified essentialist landmines to which we are all susceptible, DisOrientations stands out as a deep and optimistic engagement with “Bibliomigrancy.”  In fact, Dickinson’s work seems a kindred spirit to Recoding World Literature (2016), in which B. Venkat Mani gifts us that animated coinage. Both acknowledge the various linguistic and sociopolitical hierarchies implicit in the movement of any text away from the environment in which it was first conceived. And both suggest that by expanding the inquiry beyond one-sided power imbalances, we can do more justice to the tangled realities of migrant books and the writers who transport them.

Dickinson could perhaps stand to forego repeated assertions on the omnidirectionality of the translation enterprise. The term at times feels flaccid in comparison to the specificity of her case studies—which themselves demonstrate how illogical is the hypothesis of translation as an unidirectional phenomenon. As for the textual analyses themselves, consistently displaying German, Turkish and English versions of the Werther passages might have better served the exposition, especially given that the book will attract readers with competencies in at minimum two of the three languages. We see the English and Turkish versions (and sometimes a German one), but including all three would not be an act of mere performative thoroughness; indeed, minute translation decisions form the very basis for the arguments. This minor issue, which may well have been a decision of the publisher (and not the author), could perhaps be addressed in a future edition. That the opportunity for such an edition might arise does not seem remote: DisOrientations is well on its way to becoming a classic reference for scholars of literature that change hands, scripts and tongues.