by Caroline Rupprecht
TRANSIT vol. 13, no. 2 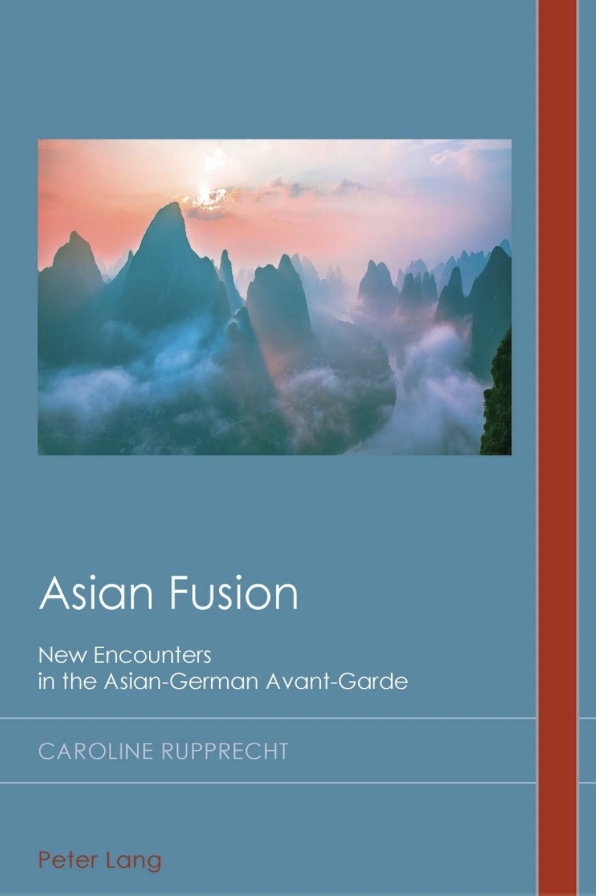 As Chunjie Zhang et. al. observe in their field-defining article, the new research area of Asian German studies has garnered much attention from scholars in various disciplines. The field, however, is still dominated by historical and sociological research. Caroline Rupprecht’s Asian Fusion brings a fresh literary perspective by connecting Asian German literature with Jewish studies through representations of the Vergangenheitsbewältigung and by investigating the continuous impact of National Socialist ideologies on Asian immigrants in Germany and Austria.

The book’s title, Asian Fusion, originally refers to a culinary practice, but the term acquires special significance when applied to the German context: “In a country where the acute fear of racial mixing culminated in the Shoah, this refusal to combine or ‘fuse’ thus demands an approach that shows how, in fact, Germans and Asians are connected rather than separate” (4, emphasis in the original). Rupprecht connects (Jewish) German and Asian voices in literature and art through the paradigm of “call-and-response,” a term that evokes the sonic practice of “communicat[ing] by listening and responding to one another within a shared space” (7). Specifically, Rupprecht imagines how an older generation of German male writer-artists (W.G. Sebald, Peter Weiss, and Joseph Beuys) evokes Asian traditions and spaces to “call” for different understandings of the afterlife of Nazi ideology and the Holocaust, while a younger generation of Asian female authors (Yoko Tawada, Pham Thi Hoài, and Anna Kim) “responds” by introducing non-Orientalist and non-reductionist ways of connecting Germany and Asia’s shared historical legacies of genocide, war, and migration (6). As the individual chapters later demonstrate, the Asian female authors are not passive respondents but active critics of their literary and artistic predecessors. Focusing on dissonance as well as harmony, the book paints a complicated picture of cross-cultural exchange where disparate voices both conflict and complement each other.

Part I compares W.G. Sebald’s Die Ringe des Saturn and Austerlitz with Yoko Tawada’s Das Bad, Das nackte Auge, and an experimental poem, “Flucht des Monds.” Rupprecht analyzes how Sebald and Tawada represent the Shoah and other war atrocities by having their protagonists search for traces of the living in inanimate sites, deserted buildings, and abandoned objects. In Die Ringe des Saturn, Sebald contrasts ancient Chinese sericulture with the Nazi Tötungsgeschäft, thereby drawing an analogy between the empty cocoons left behind by dead silkworms and the ruins of concentration camps whose now “empty” interiors still contain traces of the victims (45). Though Rupprecht acknowledges Sebald’s aesthetically complex reflection on the Holocaust, she criticizes the German author for his inherently Orientalist rendering of the Chinese Empress Dowager Cixi. Born a generation after Sebald, Tawada puts forward a more nuanced understanding of Asian German entanglements by foregrounding “in-between” spaces “where neither place or [sic!] language is hierarchically privileged,” thus undoing any set boundaries of national historical narratives (78). Through skillful close reading, Rupprecht unpacks the layered and fluid contents and forms in Tawada’s novels and poetry, which reveal the writer’s innovative engagements with “the ancient and the modern, East and West, and humans and nature” (78). As convincing as this comparison between Sebald and Tawada is, Part I could have potentially benefited from a brief consideration of the now vast primary and secondary literature on Jewish exile in China, Japan, and other parts of Asia during World War II. In fact, in a monograph that focuses specifically on the intersections of Jewish and Holocaust studies, migration and memory, and Asian cultures, it is curious that the significant literary and artistic contributions of and about this immigrant group are never mentioned. Nevertheless, Rupprecht’s elegant reading of Sebald and Tawada can provide valuable analytical insights into both authors’ literary oeuvres.

Part II focuses on a lesser-known theatrical play (Viet Nam Diskurs) and a literary travelogue (Notizen zum kulturellen Leben der Demokratischen Republik Viet Nam) by Peter Weiss, as well as a novel (Die Kristallbotin) and a short story collection (Sonntagsmenü) by Vietnamese writer Pham Thi Hoài, who now resides in Berlin. Rupprecht argues that Weiss works through his complex affects mixed with a survivor’s guilt – as a Halbjude who narrowly escaped from the Holocaust – and an ongoing sense of Ortlosigkeit by displacing them onto the distant landscape of Vietnam. Remaining a European outsider despite his travel to Vietnam, Weiss evokes the Brechtian Verfremdungseffekt in Viet Nam Diskurs, reducing the country to an abstract geographical location while avoiding engaging with the victims of Western imperialism as “living, flesh-and-blood entit[ies]” (102). By contrast, Pham Thi Hoài’s feminist writings precisely foreground corporeality and kinship to represent the gendered discriminations and economic hardships experienced by Vietnamese women throughout the twentieth century. Rupprecht reads the ways in which Pham’s female protagonists contest various acts of literal and figurative “silencing” as manifestations of the author’s struggle against stereotypes of Asian women as submissive, obedient subjects, as well as against the Vietnamese government’s censorship of her writings (116). Despite Rupprecht’s intricate literary analysis, Pham does appear as an outlier among the six authors selected, since Pham’s writings almost exclusively engage with Vietnam’s national history rather than drawing an explicit connection to German history, language, and culture. The reader would be interested in a more extensive analysis of writings by contemporary Vietnamese German writers, especially literary representations of the socialist solidarity between former East Germany and Vietnam, an exchange that is only briefly mentioned in chapter four (117-118).

Part III connects shamanistic performances and spaces in Joseph Beuys’s art exhibitions, Der Eurasier, Eurasia Siberian Symphony, and Auschwitz Demonstration, with those in Korean Austrian writer Anna Kim’s novels, Anatomie einer Nacht and Die grosse Heimkehr. Although the international art community has largely lauded Beuys’s socially engaged art, Rupprecht offers a poignant critique of the artist by drawing from new biographies exposing Beuys’s long-term connections with ex-Nazis and the fabricated nature of his war experiences as a member of the German Luftwaffe.Rupprecht argues that Beuys’s artistic mystification of his miraculous rescue by the Tatars after a plane crash in Siberia signals an intention to evade and whitewash Nazi atrocities against the Jewish population in Eastern Europe, while putting forward a form of Eurasianism that evokes proto-fascist expansionist ideologies. In direct contrast to Beuys, Anna Kim introduces shamanism “from a more informed, less grandiose” perspective through journalistic research and fieldwork about the Inuit and Korean cultures (183). Representing shamanic female figures and spaces as the media that connect past and present, East and West, the living and the dead, Kim construes non-identity as a viable alternative to the rigid framework of European identitarian polities, which regularly reduces immigrants to their outer appearance and thus excludes them from (trans)national belonging. Well-researched and convincingly argued, Part III is a culmination of previous sections. It exposes the most self-serving and borderline right-extremist ideologies of a German male artist, while lauding the complete opposite in Anna Kim’s writings, where Inuit, Danish, North and South Korean, Japanese (Zaichi), and German cultural histories enmesh in an ultimate act of poetic and linguistic border-crossing that shatters any constricted notions of memory work.

In her concluding remarks, Rupprecht observes that the works of the six authors analyzed ultimately “reveal a widening gyre of (mis)understanding” rather than conform to a comforting notion of a harmonious fusion: the book “began with a measured attempt to cross over into new territories (Sebald-Tawada), rose to a crescendo in a search for common ground, in what promised to be a discursive ‘fusion’ (Weiss-Pham), and concluded by dissolving into dissonance (Beuys-Kim)” (225). By complicating the book’s premise, Rupprecht thus presents a dynamic understanding of Asian German literary entanglements where a “call-and-response” yields fruitful dialogues, while also revealing an underlying tension between different perspectives – a tension that can, nevertheless, be gradually resolved by future generations through increased efforts on nonrestrictive frameworks of identity and creative transgressions. This book will be of interest to scholars of Holocaust studies, migration studies, art history, and contemporary literature alike. Despite occasional typos and inconsistencies in formatting, Asian Fusion offers a brand-new perspective with which to reconsider the contemporary reverberances of colonialism and Nazi ideology for new immigrants to the German-speaking world.