Published in 2015, “Fears” grapples with the immediate aftermath of the so-called “refugee crisis” in Germany.[1]In this short text, Lena Gorelik ironizes her own political correctness by dealing with the intricacies and banalities of being perceived as both an insider and an outsider. Born in 1981 to a Russian-Jewish family in St. Petersburg, Gorelik’s family emigrated as Kontingentflüchtlinge, or “quota refugees” to Germany in 1992, where she studied and began to write. Her work, which has won several literary prizes, frequently deals with topics of migration, religion, and language. Gorelik has, however, rejected “migrant” as a category: Her characters are not in the process of arriving, but have already arrived and are staying put; the overall message of her literary work is, as Katja Garloff puts it, “I am here!”[2]

“Fears” comes from an anthology of texts centering on the experiences of xenophobia in Germany. Edited by Fridolin Schley, Fremd (which means “strange” or “foreign,” or, as I’ve rendered it, “unfamiliar”) features authors who, as Ida Sophie Winter wrote in her translator’s introduction in TRANSIT vol. 11, no. 2, “examine their own less-than-politically correct thoughts” in an increasingly polarized society.[3]

“Fears” may poke fun at political correctness, at the boring outfits of German men, even at the difference between writing fiction and memoir, but beyond her sense of humor, Gorelik does not steer clear of controversial ideas or turns of phrase. In one passage, her irony is turned toward a critique of Germany’s (self-)perception of having worked through its issues with anti-Semitism. While suggesting that “we’ve come to terms with all of that,” Gorelik uses the word “aufgearbeitet,” recalling Theodor W. Adorno’s 1959 critique of postwar Germany in the essay “Was bedeutet: Aufarbeitung der Vergangenheit?” (What does “working through the past” mean?). Gorelik’s ironic and iconoclastic take on her own Jewishness is on display here, a position also found, for instance, in her 2011 book, Lieber Mischa…du bist ein Jude, which includes chapters titled “Die Top Ten der antisemitischen Vorurteile: Warum sie wahr sind” (The Top Ten Anti-Semitic Stereotypes: Why They’re All True) and “Die zehn coolsten Juden der Welt” (The Ten Coolest Jews in the World).[4]

This translation came out of a workshop at the University of Chicago. My thanks to Annie Janusch for her keen eye and for leading the workshop, and to the participants for reading several drafts. I first came across Gorelik’s work while helping Katja Garloff with preliminary translations for her forthcoming manuscript, and was introduced to this specific text by Brian Vetruba. Thanks are also due to Jon Cho-Polizzi for his suggestions and to Elizabeth Sun for her edits. I would also like to sincerely thank Peter Kirchheim for providing copyright permissions, and to Lena Gorelik for her correspondence and for her consent to translate this text. 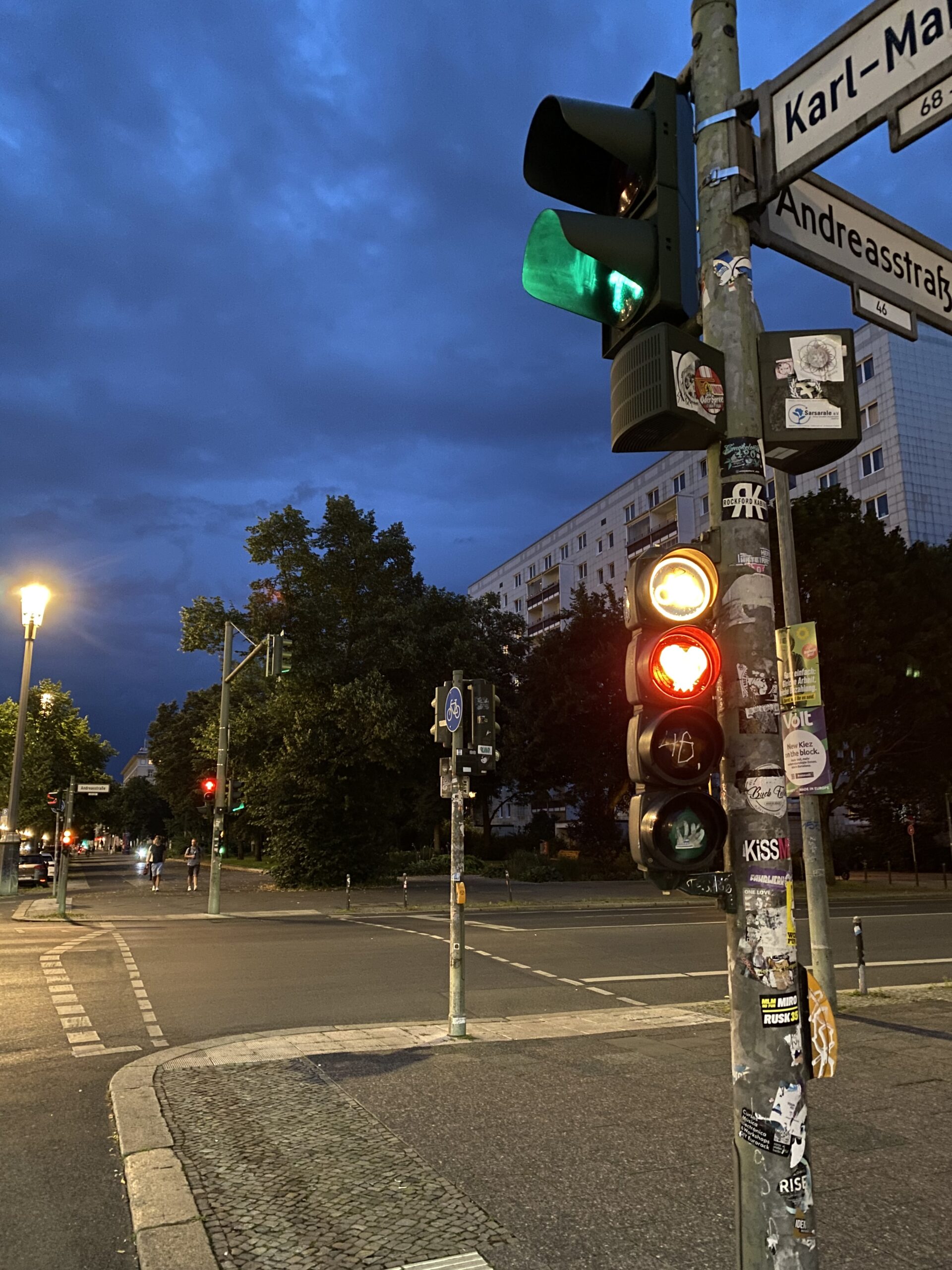 Sometimes these things seem so banal that I have to ask myself if I’m just being naïve. I might be, but only in the politically correct way of course. Which means I can sit back and tell a story.

Berlin. Winter. When you leave Munich and arrive in Berlin, you can delight in the many Lebanese takeout stands, in the matter-of-fact way everyone not only knows sushi but also pelmeni; for a minute you can almost pretend that you’re in London, but that’s already putting it too poetically. And the grey sky––you just put up with it. After all, you’ve left Munich and come to Berlin.

Today, for once, the sun is even shining a little. It’s shining and blinding me and I’m thinking about what to make of the fact that on this stretch of the Ku’damm, a few meters from the Chanel and Yves Saint Laurent, there’s a discount supermarket called Netto, and so I miss the crosswalk signal turning green.

“It’s green,” says a gentleman next to me, how friendly, and because the sun is shining and I’m in Berlin, I think: This never would have happened to me in Munich, which probably isn’t even true. The man is around that age that needs to be described rather than given a number. He isn’t old, he isn’t young, but somewhere boringly in-between, and he looks like it. Jeans, sneakers, a grey jacket, blond hair. One of those guys you’d definitely overlook. He’s just about to walk out of my thoughts when, right in the middle of crossing the street—which has apparently become a communal journey after his friendly remark—he speaks to me again: “You probably can’t see green anymore, because you voted too Green in the last election.”

One little sentence and I realize, he kinda looks like the crazy guy from that movie, the one with the greasy blond hair…

“Excuse me?” And as if he’d been waiting for my question, he stops for a second—we’ve just reached the other side of the street—and lets loose. Did he just make that leap, or did I? At first I’m so perplexed that I just have to come up with a way for him to even make these connections: from the light turning green to how I vote (which election, even?) to the Muslims (he says it that way, “the Muslims”), who are all over the place and apparently mostly in Germany and especially in Berlin—or is it Europe?—and they—it’s common knowledge, even if nobody, not even the people on TV dare to say it, even though you can find the numbers on the internet—they, by the way, are gonna decapitate all the heretics, that means us, cut off all our heads. Yeah, right here in Berlin. Everyone’s just too scared to say it.

Another leap in time. I want to get out of there between these two moments, but just as abruptly as those deluges of hate and fear engulf me—right as I can’t take it anymore and arrogantly refuse to dignify his rant with a response—I suddenly notice that we’re no longer alone. Now there are two more gentlemen and a lady: she a bit younger, the gentlemen older, all four of them fit in on the Ku’damm just as they do in Berlin and also would in Munich, and yet they don’t actually fit that well together (and they sure don’t fit with me), except for one thing they have in common, something self-evident for them: Germany belongs to us. And they are taking it away.

These days, “they” are Muslims. It used to be the Jews, but thankfully we’ve come to terms with all of that; later, it was the “foreigners” and “guest workers” in general, and the Turks and Italians and Greeks in particular (the Greeks are back up there again), and many, many others.

Why aren’t they more afraid of the fact, I wonder, though I don’t say it out loud, because what’s the point—and why do I think there’s no point in discussing it with them, how presumptuous of me—that by 2025, at the latest, there will be a shortage of seven million skilled workers here in Germany? Or afraid of the fact that their children might grow up in a country where they won’t encounter any form of difference, not among people, religions, opinions, traditions, languages, which is why, one day, they’ll end up leaving this country out of their own natural curiosity, but hold on, maybe that’s just my fear.

How long has it been there, this fear of people who have lived with and among us for a long time, who see themselves as part of our society, our country—not all of them of course, but a not-insignificant number? This fear is nothing new and it’s plainer than day: It’s the fear of the unfamiliar. Unfamiliarity is scary because—as the word already says—it’s unfamiliar. And unfamiliar can’t be good because unfamiliar is different. And different, yeah, we’re afraid of what’s different. Most of the time, this fear is hiding in the grass. But it’s always ready to pounce. It doesn’t take much to trigger it: sometimes an occasion like the building of a mosque, sometimes an Islamophobic politician like Thilo Sarrazin, sometimes a single sentence, or a disconcerting social development. And then there it is, this fear of others who…, and this line of thought can go on and on in any direction, suddenly spreading like the plague. But it doesn’t come out of nowhere. If twenty thousand PEGIDA supporters can be mobilized for rightwing riots in Dresden in just a couple days, it means this fear has been lurking just below the surface for a long time. It means that all the politicians’ empty reassurances—of course Germany considers itself a country of immigrants—are nothing more than that: reassurances. It means nothing more than that it’s impossible, for many people, to imagine things without a hierarchy, that many still believe that someone named Paul has more of a right to be in this country than someone named Mustafa. And yeah, it’s really that simple.

I escape from those people whose fear makes me afraid, and I walk along the Ku’damm and wonder about the winter sun, which is still shining, even though it would have to seem less bright after that conversation if I were writing a novel. But the day keeps on going, by chance a Monday, and somewhere, even in Berlin, there are PEGIDA and anti-PEGIDA protests taking place. I don’t participate, and I talk myself into believing that it wouldn’t make any difference, that there are people on both sides thinking the same thing and encouraging each other that there’s another Germany, one without fears, but it’s always the same thing over and over, and the fears you’re protesting against are too hot for you to ever even touch.

Later that day I’m sitting in a taxi. The taxi driver is chatty. I don’t enjoy talking to taxi drivers very much, small talk’s not easy for me. The taxi driver tells stories about men who climb into his taxi late at night, plastered and slurring, reassuring him that they had no intention of cheating on their wives, it just kinda happened like that, like they hadn’t even taken part. And my girlfriend, who’s sitting next to me in the taxi and knows how much I hate small talk, answers him—yeah, these men—she cracks a couple jokes and together they get all worked up about men—those pigs—tossing an unsophisticated but amusing ball of clichés back and forth. They talk about sex, which awakens my desire to get out at the next intersection, and they laugh, and somehow I laugh with them, too. And then that banality occurs, the kind that makes me ask if things can really be so simple or if I’m just naïve. We pay. Open the doors, thank him, say goodbye. Then the taxi driver says: “If there were more people like you in Germany—people who just talked to me—I’d feel more comfortable in this country right now. I’ve been living in Berlin for thirty years.” I hesitate for a moment, then I let it just be what it is—banal and naïve (like the last sentence of this story, by the way)—and he smiles as he drives away.