Back to Your Homeland is Our Nightmare or continue on to “Foreword to the Collection” by Fatma Aydemir and Hengameh Yaghoobifarah. 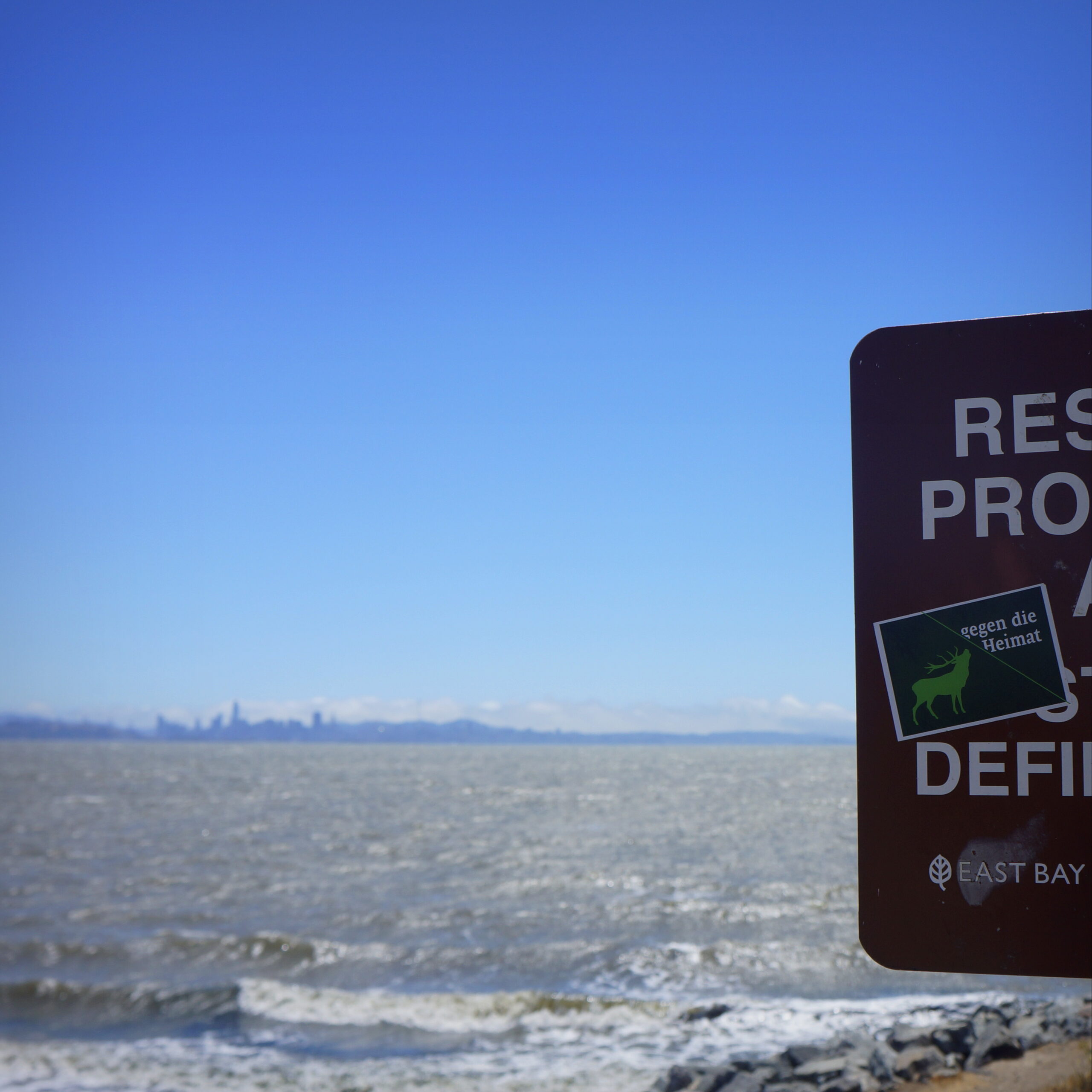 It is a great privilege to introduce this second (and now complete) issue of TRANSIT Journal’s digital publication of Your Homeland is Our Nightmare. This special issue represents new ground for our journal, as well as the fruition of several years of transatlantic collaboration and exchange. What began as a graduate student-led initiative to provide an English-language preview for the recently published essay collection Eure Heimat ist unser Albtraum (Ullstein fünf 2019) has now culminated in the translation of an entire fourteen essay volume—a first for our journal.

We are particularly grateful to Ullstein fünf for their generosity in helping us to realize this project and make these essays available to a broad English-language readership through our open-access platform. We are also grateful to the German volume’s editors, Fatma Aydemir and Hengameh Yaghoobifarah, who have been instrumental in facilitating communication between authors, translators, and editors. And finally, we are grateful to our many translators, without whose diligence and labor this project would not have been possible.

In the months following our spring 2020 publication of the initial eight essays from the Heimat collection, TRANSIT was contacted by numerous scholars and translators, educators and activists, many of whom expressed both an interest in our translations as a teaching and research resource as well as their hope that we would one day publish a translation of the entire volume. Several enthusiastic readers even volunteered their help with this project.

In the fall of 2020, TRANSIT began to pursue these follow-up translations in earnest, reaching out to our many contacts to acquire a feeling for how feasible completing this book-length project might really be. We were quickly overwhelmed by the number of interested parties who began submitting inquiries of their own and sometimes sample translations of the remaining, untranslated essays. TRANSIT Journal remains grateful for the interest and enthusiasm of our readers and participants—including those whose submissions did not ultimately make it into this published volume. The outpouring of energy and passion around this project has reinforced our own conviction in the ongoing importance of making such contemporary works available outside their original German-language context.

It is important for us to acknowledge that our project has coincided with debates concerning the visibility and positionality of the translator. We see the oft-disregarded experience and expertise of the translator as an important part of these debates. For many publishers, translators play a crucial role in expanding the canon of available literature, yet translators are frequently offered little to no recognition for their labors in the finished publications. Rather than appearing alongside the authors on the covers or title pages of their work, translators’ names are often listed instead in endnotes or as marginalia—if at all. In recent months, translators and authors have begun a renewed effort to raise awareness of this issue through activism; petitions, published articles, and the use of hashtags such as #TranslatorsOnTheCover demand changes in industry standards and the appropriate recognition of this labor. TRANSIT Journal is committed to acknowledging the work of all of our contributors.

In the spring of 2021, following the controversy surrounding the translation of Amanda Gorman’s inaugural poem “The Hill We Climb,” renewed emphasis has also been placed on the positionality of the translator. The public outcry around the selection of an established, white translator to engage with the breakthrough works of a young, Black poet opened larger debates around the publishing industry’s power in selecting translators for literary works and the overall lack of diversity within published translation. Providing definitive answers to the questions which have been opened by this controversary is not within the scope of any one publisher, translator, or journal, but TRANSIT recognizes that each translator brings their own unique blend of research, commitment, and lived experience to their translation work.

We have endeavored to work with our authors to ensure their explicit approval in all aspects of these translations. In crafting this translated volume, it was important to our editors and authors alike to select from a broad spectrum of contributors—both students and professors, professional and first-time translators alike—representing a wide-range of communities and lived experiences capable of adequately relaying the divergent voices of the German-language original. The essential function of the literary translator is to make the words and cultural context of a foreign language accessible to a new audience, and this function is defined by a translator’s willingness to position themselves vis-à-vis the author both through a commonality of experience as well as committed research, engaged conversation, and an active interest in providing the best possible translation of the original.

As aforementioned in the 2020 Translators’ Introduction to the initial eight essays (republished in this volume as well), we have made some collective decisions as translators in developing a vocabulary around certain culturally specific words and phrases found in the German original. New and returning readers alike may benefit from consulting this short introduction to familiarize themselves with both the language and context of the original.

In publishing this volume, TRANSIT has done our best to incorporate the wishes and specific choices of each individual author while maintaining an overall commitment to continuity throughout our translations according to the oversite of TRANSIT’s editorial team. Many translators have, nonetheless, also seen fit to gloss their use of specific language within their translations, using endnotes to provide additional information for our readers. Occasionally, changes from the original German texts have been introduced with oversight from the authors to reflect new information or provide clarifications. This second edition also includes minor changes to some of the previously published translations from 2020, revised with input from both author and translator. Minor formatting issues have also been revised in order to continue to comply with TRANSIT Journal’s stylesheet, and to maintain a sense of coherency between the fourteen essays. Each translation remains a communication between author and translator: a finished work in progress.

The subjects and events problematized by the authors in their 2019 German publication remain as pressing today, at the end of 2021, as they were at the time of the original publication. Now, more than two years after the rightwing terror attack in Halle, nearly two years after the rightwing terror attack in Hanau, in the wake of the storming of the German Reichstag which seemed only to anticipate the more violent January 6 attack on the US Capitol a few months later, the attempt to redefine a more inclusive homeland seems more relevant than ever. The pandemic-influenced world has created new hurdles and restrictions on the free movement and open borders that have long-underscored the principles of a united Europe. It has also directed new attention to the limitations of these ideals and the violent structures which continue to define Europe’s (as well as the United States’) external borders.

At the same time, the transition to new forms of digital communication have demonstrated the power of collective action in the appeals for government accountability resounding across the planet. We have seen the global reach of the Black Lives Matter movement invigorated by the George Floyd Uprising in 2020 and experienced the consolidation of networks of communication between communities and activists the world over. And we have become increasingly cognizant of the urgency of the ongoing struggle against structures of rightwing violence. The essays in this collection provide perspectives rooted in the experiences of German-speaking Europe, yet they address a global audience in this era of imperiled democracy. Their questions transcend the artificial boundaries of national language: What are the consequences and the limitations of a mother’s love? How do we identify danger and by whose definition? Whose language is perceived as normative and what assumptions undergird our understanding of assimilation? Who dictates the boundaries of our sexuality and for whose benefit? How do we come to terms with our own shortcomings as activists or address the violence of our inheritance? What power does the fantasy of homeland retain in the 21st century?

The promise of democracy is founded on the twin pillars of plurality and compromise—ideals which increasingly appear all but unattainable amidst the polarization and political stalemate on both sides of the Atlantic. This collection first reminds us that we take both values for granted at our own peril. It then offers radical diversity as a solution to the increasingly quixotic search to define an elusive middle ground. Radical diversity demands simultaneously the empowerment of divergent voices and the willingness to accept and appreciate the difference they profess. It does not always provide answers, but rather, a framework for asking new questions and a recognition that the world we live in is determined by our thoughts as much as by our actions. Our words and our language form the basis upon which we construct our possibilities: A conversation whose ends can only be justified by their means. We are grateful for the expressed commitment of all of our contributors to take part in this conversation, and to all of you: our readers.

Back to Your Homeland is Our Nightmare or continue on to “Foreword to the Collection” by Fatma Aydemir and Hengameh Yaghoobifarah.